The idea for this blog is based on Chapter 2 from ‘Standing on the Shoulders of Giants’.

Why are some things so easy to learn and why do we struggle with others? Why are we motivated to learn one thing, but dread the next? Why do people prefer talking to each other instead of focusing on (sometimes difficult) stuff they need to learn? These are all interesting questions. David Geary (2008) sheds light on the answers to them by looking at learning through an evolutionary lens. This lens helps us understand why we can learn certain things so ‘naturally’ while others require blood, sweat, and tears.

We humans have evolved to create culture (e.g., a common system of beliefs that facilitate cooperation, a division of labour, formal and informal expectations for the behaviour of in-group members, as well as the sharing of information and resources, as Geary defines it). We have also evolved learning and motivational mechanisms that support the retention and cross-generational transfer of culturally useful knowledge. Sounds clever, right?

Here’s the challenge. Especially for cultures where knowledge increases at a rapid pace, the gap between what we as children naturally and almost effortlessly learn (biologically primary learning) and what we as adults need to learn to be successful in these societies (biologically secondary learning) has widened over time. This is where education comes in. Basically, formal schooling was a cultural innovation within societies to close that gap. In other words, schools were ‘imposed’ on us to facilitate the cross-generational transmission of secondary abilities and knowledge.

To understand what this all means, we first need to understand biologically primary learning.

The idea of primary biological learning might make more sense if we look at a so-called ‘taxonomy of folk modules’: 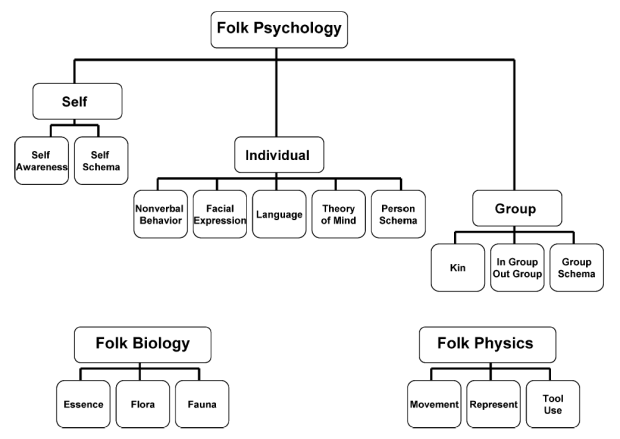 The folk domains are organised around the idea that we need to focus behaviour to achieve access to and control of social, biological, and physical resources, that we need to survive and reproduce.

One example of a modular primary (or ‘core’) ability is our natural tendency to pay attention to someone’s face and to automatically process key pieces of facial information.

Another example is forming friendships, which is supported by, what Geary calls ‘folk-psychological competencies’. Friendships are important for us. They’re clearly correlated with physical and psychological health, but perhaps more importantly, with determining in-groups that are beneficial for us and safe and out-groups that can be dangerous and harm us. These friendships enhance survival as well as our reproductive prospects! Who knew?

Folk systems have evolved to cope with information and conditions that are consistent within our lifetime and across very many generations. These mechanisms guide our attention, enable us to quickly process corresponding information, and then respond in a more or less automatic manner (e.g., Hey, something is rustling in the tall grass, it could be a predator, run for your life). This means, that most of the forms of information that we encounter daily like meeting a new person and determining her/his sex are processed automatically and with little cognitive effort.

There are, of course, situations in which these evolved ‘automatic’ responses aren’t sufficient. This happens, when we’re dealing with ‘novel information’, something we haven’t encountered before. When this is the case, these ‘folk systems’ need to be inhibited and we need to engage in controlled problem solving. This ability to inhibit and switch is what distinguishes the human brain and mind from other species. This evolutionary novel information is also called biologically secondary knowledge.

Humans are the only species that can generate a mental representation of a future life that’s better than the current one. From an evolutionary perspective, ‘better’ means that we’ll have more social influence and more resources. We then compare this better world to our current situation and mentally devise and rehearse strategies that we can use to reduce the difference between the two states. 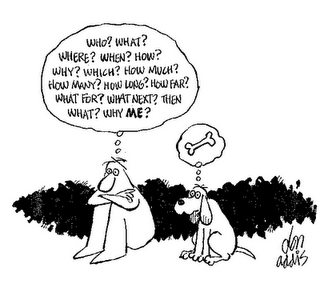 The cognitive mechanisms that support these conscious ‘simulations’ are working memory, attentional control, and the ability to inhibit automatic processing of, what Geary calls, folk-related (‘primary’) information. Both mechanisms are the ‘core of general fluid intelligence’ (in contrast to crystallised intelligence, see the following image). 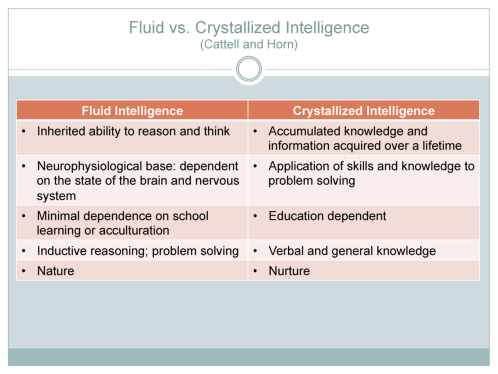 How this works is that, when humans end up in a situation where these ‘folk’ heuristics don’t suffice for dealing with that situation, we inhibit that initial ‘attempt’ to deal with the situation (e.g., primary trial-and-error problem solving) and switch to our conscious system that allows us to reason and solve problems.

Now, here’s the thing. During the last several thousand years (which in evolutionary terms is a very short period of time), we have quickly accumulated a lot of cross-generational cultural (secondary) knowledge. Because this has happened so fast, our ‘folk’ abilities haven’t evolved counterparts to facilitate the learning of ‘secondary abilities’ to the same degree as primary. In other words, we just haven’t developed the capability to acquire biologically secondary knowledge in the same more or less ‘natural’ and seemingly effortless way as how we acquire biologically primary knowledge. The breadth and depth of secondary knowledge available in modern societies (also because of books that allowed us to capture more abstract knowledge that we can ‘transfer’ across generations and more recently the Internet) is just too much for us to learn ‘naturally’.

To close this gap, we as societies have invented schools to provide us with a means to access and transfer this information and to ensure a core set of skills and knowledge for all members of society.

The reason why all this is so interesting (at least, to us), is that it helps us to (1) explain why people are naturally motivated to learn some things but struggle with others, (2) explain why learning to read and write our mother tongue is different from learning to speak it, (3) understand why we need direct instruction to learn novel and difficult things and (4) know what we can do to motivate people to learn them.

How to help and motivate people to acquire biologically secondary knowledge

It makes sense that humans have a core motivational bias to engage in activities that flesh out any knowledge that relates to the core folk psychological domains. This is deeply engrained in our DNA, so to speak. We have a natural focus on self, social relationships, and group dynamics; basically anything that helps us survive, reproduce, and be happy. Children are no different. They prefer to engage in things like self-initiated play and exploration. They also prefer things like stories to convey morals or themes relevant for day-to-day life, and apprenticeship type of learning (e.g., observing adults cleaning the house and then imitating their behaviour). In school, they’ll show similar preferences, for example, preferring interaction with their peers, to studying or doing homework. This is all totally understandable from an ‘evolved developmental bias for a highly social species’ (p. 186).

The reason why children and adolescents struggle to acquire secondary knowledge, is because it’s difficult and can often require a lot of effort. Our brains simply haven’t evolved to ‘manage’ this type of learning like it manages primary learning. So, what do we need when learning increasingly evolutionary novel knowledge and abilities?

First, we need to become better at inhibiting the ‘folk systems’ (our initial biases). Hence, inhibitory control[1] is crucial when it comes to learning new and complex things. Also, instead of clinging to the idea that we need to follow our natural instincts (primary learning), we need to acknowledge the importance of focus and effort for secondary learning. Because secondary learning relies on working memory, it requires a step-by-step approach, preferably through direct instruction (see our blog). For people in general, belief in the importance of effort when it comes to learning, is key.

In this light, Dweck and Leggett (1988) have demonstrated that children’s beliefs when it comes to intelligence, is a predictor of their attributions, their goal orientation and in turn, their beliefs with regards to the role of effort in learning. Some children believe in an incremental (malleable, increasable, controllable) theory of intelligence, while others think that intelligence is fixed and an uncontrollable trait. Children who believe that intelligence can be increased, are learning oriented. They set learning goals focused on improving and they see effort as a strategy for activating their ability for mastery. They also attribute failure to a lack of effort, instead of lack of ability. In contrast, children who think that intelligence is something you can’t influence, are performance-oriented. They set performance goals (focused on proving ability) and they perceive effort as something that demonstrates low ability. When they fail, they make so-called ‘incompetence attributions’, meaning that they blame themselves for failing and they believe failing confirms a lack of ability.

These beliefs are important when it comes to guiding learners. Geary advocates starting to focus on this in early secondary learning; that is, the moment children start to transition from primary to secondary learning (e.g., when they start learning how to read and write). This way, we can influence their attributions, or their motivation to assign a cause to their actions or behaviours, about learning and instilling the expectation that learning often requires effort.

The concept of desirable difficulties comes into play here. Bjork (1994) explained that we need to help learners create durable and flexible access to critical information in memory. A learning task with desirable difficulty is “a learning task that requires a considerable but desirable amount of effort, thereby improving long-term performance”. This, so says Bjork, “is partly a matter of achieving a certain type of encoding of that information, and partly a matter of practicing the retrieval process” (p. 188). With regard to ‘encoding’ this means, very simplistically, to achieve an understanding of the knowledge in question, while, when it comes to retrieval, the focus is on practising the actual production of the knowledge and procedures that are the target of training. To help learners to do both effectively, we need to use what Bjork calls ‘manipulations’. What exactly these need to be, of course depends on the learning goal. However, one general example of a ‘desirable difficulty manipulation’ is interleaving  (Rohrer, 2012)/ variability of practice  (Van Merriënboer & Kirschner, 2017), where you introduce variation and unpredictability in the training environment. This type of practice causes difficulty for the learner in the short-term but enhances long-term performance and transfer to novel but related task environments.

Children need to start to experience failure and over time, will have a greater sense of personal control over their learning and will better sustain their focus and motivation as new, difficult things to learn will move further and further away from primary domains. The older we get, the more we need to acquire secondary knowledge and abilities, so we better learn what it takes early on.

The gist of it all: Set people up for desirable difficulty and possible failure in order to set them up for success! 😊

Cattell, R.B. and Horn, J.L., 1978. A check on the theory of fluid and crystallized intelligence with description of new subtest designs. Journal of Educational Measurement, 15(3), pp.139-164.

[1]  An executive function – that permits an individual to inhibit their impulses and natural, habitual, or dominant behavioural responses to stimuli

15 thoughts on “Looking at Learning Through an Evolutionary Lens”