The book “Urban Myths about Learning and Education” by Pedro de Bruyckere, Paul A. Kirschner, and Casper Hulshof ends with a section on why myths in education are so pervasive and stubborn. One of the most remarkable examples was drawn from Farhad Manjoo’s book True enough: Learning to live in a post-fact society. It’s what he calls the Photoshop explanation. Self-declared experts can publish anything they want thanks to the Internet. They even have access to “recognised” platforms to share their “expertise” (for example, recently two ladies from a foodie business called “The Green Happiness” claimed on Dutch television that a chicken’s egg is basically a chicken’s menstrual period and therefore it was not healthy to eat eggs. Or take the “Food Babe” who ‘discovered’ carcinogens in your toothpaste and just about everywhere else. These are only two example of the strong and nonsensical claims they made on (un)healthy foods). These type of experts – let’s call them quacksperts seem to come crawling out of the woodwork everywhere! It seems that there’s no way to get around them; they come to us through each medium, within each niche and with sometimes contradictory stories, so that it becomes impossible for a layperson to determine what’s true and what’s not. 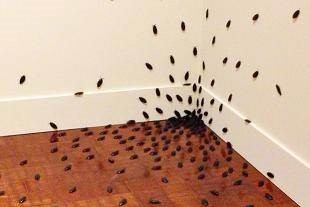 Quacksperts crawling out of the woodwork everywhere!

According to Manjoo the danger of living in a Photoshop era is not the ever-increasing corrupted photos, but rather that the real photos are often dismissed as being fake. In other words, when each photo, explanation, expert, or whatever else is questioned, then ALL photos, explanations, experts – you get the point – can be dismissed and anyone can choose their own expert. You’re free to choose the expert whose stories match your own beliefs or ideology. Facts no longer count; only feelings and beliefs. Just look at Donald Trump and his supporters – this clip with Newt Gingrich is a perfect example of mixing up feelings as facts and John Oliver’s reply which illustrates how dangerous that is – to see an extreme example and its likely to have disastrous consequences (this is a belief we’re sharing here although it has, we’re afraid, turned out to be fact).

This problem has been around for a while as shown by Douglas Carnine’s Why education experts resist effective practices (and what it would take to make education more like medicine), which was published in 2000. In this short report (12 pages) Carnine compares educational sciences with medical sciences. Medical scientists take scientific evidence produced by other medical scientists seriously. Educational scientists don’t. A lot of the educational research out there can even be viewed as the cause of that problem. Many studies in the educational sciences field lean on qualitative studies (and thus, generalisation is out the door) and sometimes this type of research is conducted by people who explicitly feel quite a bit of hostility towards and even disavow quantitative and statistical research methods. Even if research is crystal clear on a certain topic, for example how to best teach children how to read, some researchers knowingly ignore these results if they don’t meet their ideological preferences. According to Carnine, within education “the judgments of “experts” frequently appear to be unconstrained and sometimes altogether unaffected by objective research” (p 1). He calls this symptomatic for a field that has not evolved into a truly mature profession. In such a field, teaching methods that are proven to be ineffective are still embraced and without a doubt, fads such as learning styles can be found in scientific articles (also see Paul Kirschner’s recently published Invited Comment Stop Propagating the Learning Styles Myth in Computers & Education).

Carnine concludes his report with an excellent description of one of the best and longest running projects (Project Follow Through with more than 70,000 students in more than 180 schools). He explains that the project evaluated five different educational models (Open Education, Developmentally Appropriate Practices, Whole Language, Constructivism/Discovery Learning, and Direct Instruction). These models broadly fall into two categories; that is child-directed-construction of meaning and knowledge and those based on direct teaching of academic and cognitive skills. The shocking part is that Carnine describes how the impressive results of the study on the effects of these models (see Figure 1; copied from the report, which shows that direct instruction is head and shoulders above the other models) has just disappeared into some kind of black hole (the infamous ‘circular file’). 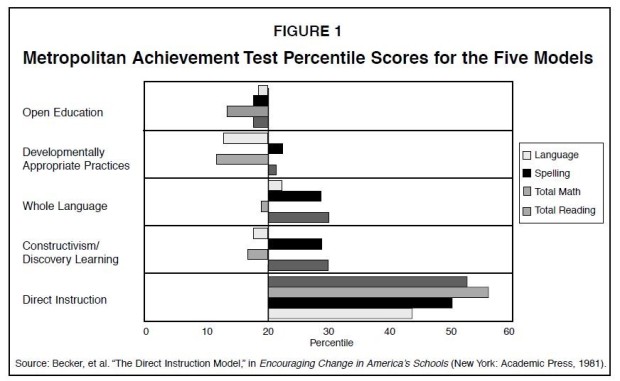 A more recent example of giving right of way to ideologies and ignoring scientific results can be found in the PISA report that was published late 2016. Figure II.7.2 (of the 27 factors associated with science performance) clearly shows the positive relationship between direct instruction and student achievement (second strongest result; box at the top of the figure) while enquiry-based instruction shows a much weaker – actually a negative – relation (box at the bottom). What this means is that

… in almost all education systems, students score higher in science when they reported that their science teachers “explain scientific ideas”, “discuss their questions” or “demonstrate an idea” more frequently. They also score higher in science in almost all school systems when they reported that their science teachers “adapt the lesson to their needs and knowledge” or “provide individual help when a student has difficulties understanding a topic or task” (p. 228). 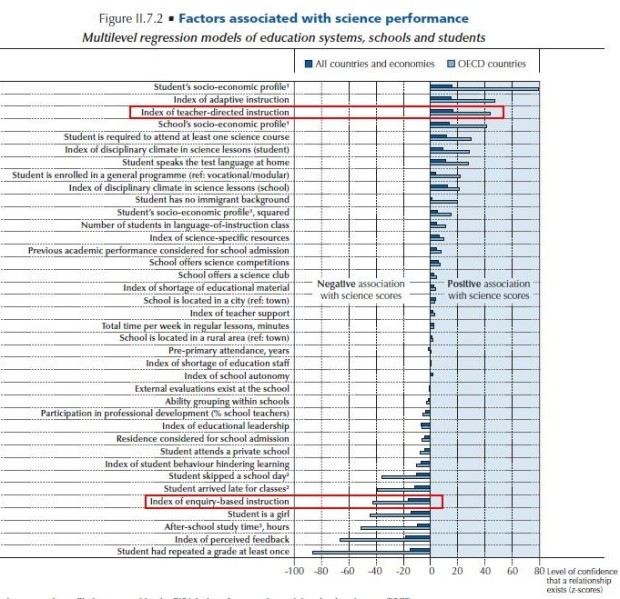 This is shown even better in the following two charts: 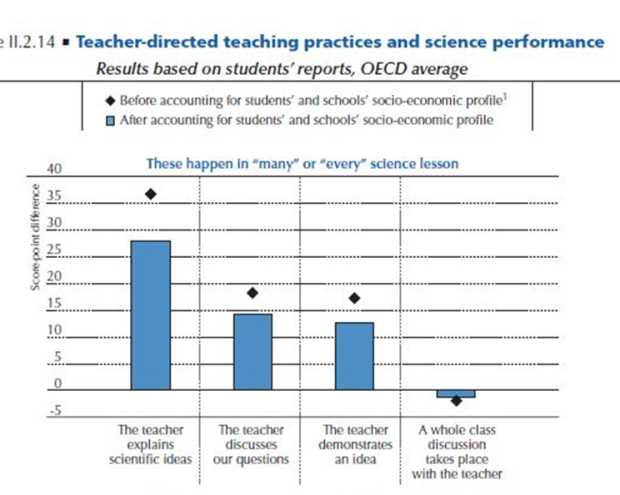 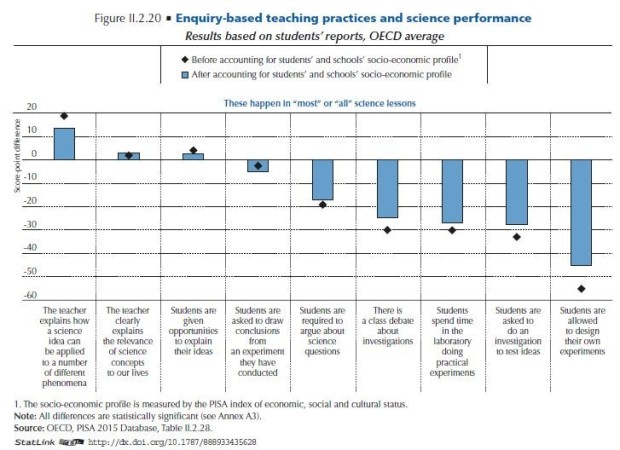 Although this distinction is very clearly shown in the figure, the PISA report is very hesitant with regards to interpreting these results. It seems as if the authors can’t bear the thought to dismiss the enquiry-learning ideology. Pathetic and unfair!

Let’s conclude with a somewhat bleak but striking quote from Carnine’s report:

Until education becomes the kind of profession that reveres evidence, we should not be surprised to find its experts dispensing unproven methods, endlessly flitting from one fad to another. The greatest victims of these fads are the very students who are most at risk (p 1).

Carnine, D., (2000). Why Education Experts Resist Effective Practices (And What it Would Take to Make Education More Like Medicine). Retrieved from http://www.wrightslaw.com/info/teach.profession.carnine.pdf