Henry Green, a British novelist talking about his craft, wrote: “The more you leave out, the more you highlight what you leave in.” This might be very true when it comes to highlighting as a learning strategy.

Sometimes learners have to deal with large amounts of content, for example in books or articles. It’s usually the teacher’s job to emphasise which parts of the text are key. (S)he can do this by using advance organizers and by intermittently focusing the learners’ attention on foundational concepts and skills (e.g., prompting; also see our previous blogs on spaced practice and what makes a top teacher). No matter what the teacher does, learners still need to discern the key things in a text themselves. They usually do this by using their favourite study mate: the highlighter! 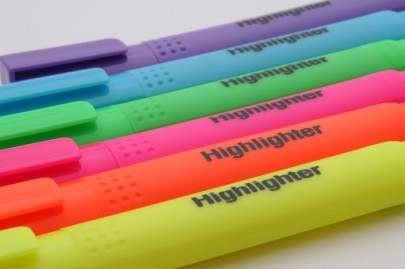 This blog explores highlighting as a learning strategy. What empirical proof is there about its (in)effectiveness? What guidelines do we need to give to learners to help them optimally use highlighting as a learning strategy? These questions, have, for example, been explored by Miyatsu, Nguyen, and McDaniel (2017) and Dunlosky, Rawson, Marsh, Nathan, and Willingham (2013).

Highlighting has minimal effect, despite its potential

Highlighting is a very simple strategy which doesn’t require much more than the learner reading the text and deciding what needs to be highlighted and then highlighting it. The question is, to what extent such an easy-to-apply strategy have the desired effect?

Despite a low effectiveness score in various review studies (e.g., Dunlosky et al, 2013; Marxen, 1996), highlighting seems to have potential to be a good learning strategy. After all, salient attention cues in texts are beneficial for readers. For example, we know that underlined text, capitalised words, marked text, etcetera, are better remembered by readers. This effect is often described as the isolation effect (Hunt, 1995). In one study, learners were asked to answer questions on articles published in Scientific American. Within the first group, five statements were highlighted, while in the control group nothing was highlighted in the text.

The test scores related to the given statements were higher for the intervention group (statements were highlighted), in comparison to the control group where there was no highlighting (Cashen & Leicht, 1970). These results suggest that highlighting increases the reader’s attention and because of that, the highlighted text is better processed. This is called ‘intentional learning’, or in other words, purposeful learning of something that is specifically emphasised. This is similar for techniques like asking (adjunct) questions or making learning objectives explicit before reading a text. By helping the learner to find focus, these parts of a text are better coded and remembered.

Although highlighted text draws a learner’s attention to the highlighted parts, researchers run into a shortcoming of highlighting as a learning strategy. As is the case with almost every tool or technique, its effectiveness depends upon whether it is used properly. The challenge with a technique as highlighting is that learners need to decide how much text they need to highlight as well as which parts they should highlight. This turns out to be a problem!

The biggest challenge with highlighting as a learning strategy, not surprisingly, is that learners need to decide which text needs to be highlighted.

But that’s not all! Researchers concluded that there are even more limitations to highlighting to support learning.

In addition to those potential disadvantages, mindless and endless highlighting can also be detrimental in that it can prevent learners from focusing on other, more productive strategies like retrieval practice. However, through combining marking with other proven learning strategies, we can help learners increase highlighting’s effectiveness.

How to use highlighting in an effective manner?

It should be obvious by now: The quality of the highlighting is critical to whether it is an effective strategy. With the following additional support, highlighting can become more useful.

Takeaway: Under most conditions, highlighting is a non-effective learning strategy, especially in the way it’s used by most learners. However, for learners with a relatively large amount of prior knowledge on a certain topic, it can help them to remember key information. For novice learners with less prior knowledge, highlighting will often cause problems in choosing what is important and what isn’t. Only when learners receive the right training, in combination with other effective learning strategies, can they benefit from highlighting. Future research needs to figure out how we can help learners learn how to effectively highlight, given the fact that most of us, when we’re trying to learn something, will continue to apply this popular technique (despite its relative ineffectiveness!)

Now go print this blog and highlight it! 🙂

Marxen, D. E. (1996). Why reading and underlining a passage is a less effective study strategy than simply rereading the passages. Reading Improvement, 33(2), 88-96.

7 thoughts on “Less is More: Highlighting as Learning Strategy”